The new religious classifications are independent of race.

Pew Research Center has released a new report examining “important traits that unite people of different faiths, or that divide people who have the same religious affiliation” to categorize levels of religiosity in Americans

But a new Pew Research Center analysis looks at beliefs and behaviors that cut across many denominations – important traits that unite people of different faiths, or that divide people who have the same religious affiliation – producing a new and revealing classification, or typology, of religion in America. It concerns belief systems held by people and how actively they tend to believe in them. It is also important to comprehend how such beliefs play out.

The new typology classifies American adults into a total of seven cohesive groups. The classification was done on the answers given as a response to 16 questions regarding their spiritual practices and beliefs. The value was put on religion and the methods they use for fulfillment and meaning in life. Among the seven groups, three groups are made of supremely religious Americans who hold traditional views concerning God. They believe that organized religion represents a positive force in American life.

The “Sunday Stalwarts” group displays the maximum religiosity among all the seven typology groups. They are active when it comes to following their faith. Any religious congregation will have Sunday Stalwarts in them. The “God-and-Country” believers were found to be less active in church activities or any other religious organizations, but like the Sunday Stalwarts, they hold right-wing views on political and social issues. 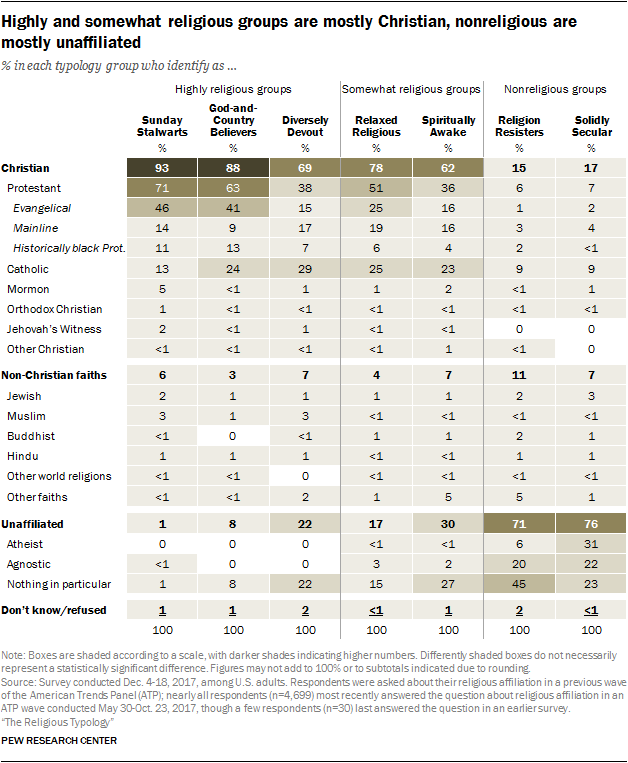 More populous than the above two are the “Diversely Devout”. Like their name, their belief system is also diverse. It is found to be the only group whose members claim to believe in God as defined by the Bible. These people also tend to believe in reincarnation and psychics. The Diversely Devout holds the belief that spiritual energy could be in several physical objects like crystals, mountains, and trees.

At the other end of the typology classification is two non-religious groups distinct by their member's tendency to rarely attend any religious services or none at all. They rarely pray and reject all beliefs in God or the Bible. Some of them believe in a higher spiritual force or none. The least religious group is the “Solidly Secular.” These members are well-educated, comparatively affluent, and majorly white. “Religion Resisters,” another group, consider themselves to be spiritual but non-religious. Both groups are fiercely opposed to any organized religion.

This wasn't exactly a Sooper Sekrit.

According to @pewresearch my religious views are closest to those of Solidly Secular. See where you fit. https://t.co/LlYuFxY9Ri