During Pope Francis’ recent three city tour in America, people got to see and hear a lot more from the popular Pope. He created a lot of goodwill and positive vibes through his homilies. He visited the U.N. meeting, the cathedrals and even the prison to spend some time with the inmates. But what was the overall effect of Pope Francis’ visit to the U.S.? 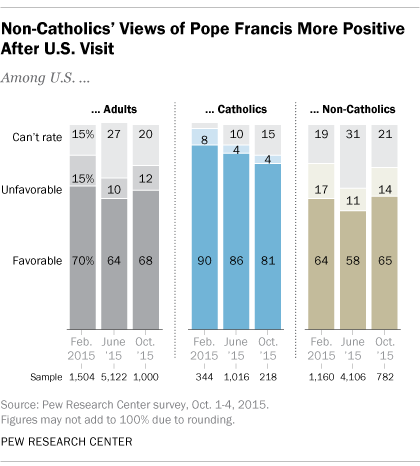 Just a day after the Pope returned to Vatican, the Pew Research Center conducted a new survey, where they asked Americans about their thoughts about the Pope, his ideas and their opinion of the Catholic Church. The study findings were pretty interesting to say the least. It pretty much cleared the fact that Pope Francis is a popular figure for every one across political spectrum. People from the liberal, moderate and democratic groups were foremost in the list of people who say that Francis has given them a more favorable view of the Catholic Church. In short, both Catholics and non-Catholics are more likely to say that the Pope positively affected their views of the Church than negatively.

The results of the survey show a surprising fact too. While 36 percent Democrats said that the Pope positively affected their view of the Church, only 2 percent said their views were affected negatively. On the other hand, for 27 percent of the Republicans who held a positive view, 10 percent held a negative view. When looked at from the ratio point of view, for every 17 democrats who have a positive outlook about the Catholic Church, 1 has a negative view, as against the Republicans for whom every 3 positive has 1 respondent with a negative view. 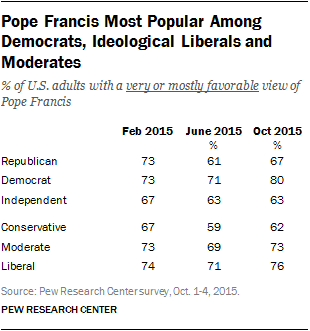 The reason might be the Pope’s liberal thoughts on matters such as poverty and environment that though does not sit too well with the Republicans works well with the Democrats. On the contrary, the Democrats might not be too happy with the Pope’s ideas about marriage, contraception and homosexuality, topics that are close to the Republican thoughts. The actual upsurge noted was the Pope’s popularity among the non-Catholic groups that is remarkable.

The Francis Effect! Powerful positive impact from #PopeFrancis's visit on the perception of Catholics generally: http://t.co/2ovsRslhU5

In a recent survey organized by the Public Policy Polling, it was found that more than a third of Republicans voted that Islam should be illegal in the U.S. This comes as a surprise from a party who upholds the belief of freedom of religion as one of the rights in the Constitution.

More than half of the Republicans voted that Christianity should be the official religion of the country. A small percentage of people even voted for elimination of the freedom of religion from the constitution. A time when democrats are seeing a favorable side of the Catholic Church and non-Catholics are upholding the beliefs of the Pope, the results of this poll surely has opened up a lot many interpretations.