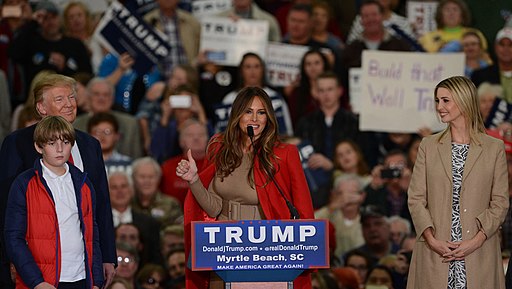 The First Lady had a lighthearted conversation with Pope Francis.

Melania Trump, the first lady of the United States, confirmed after meeting Pope Francis she is no doubt a practicing Catholic. She met the pontiff on May 24. The latter gave his blessings to the first lady's rosary.

After the two shook hands and exchanged the obligatory pleasantries, Melania Trump held the beads in her left hand. She extended her arm towards Pope Francis, and he subsequently blessed them by making the cross sign. The pontiff placed his hand over hers. This simple ceremony of blessing the beads is of extreme importance to any devout Catholic. To the latter, to be blessed by a pontiff of such stature represents the pinnacle of Catholic holy ceremonies. Melania Trump later tweeted that she will remember the meeting all her life.

Today's visit with His Holiness Pope Francis @Pontifex is one I'll never forget. I was humbled by the honor. Blessings to all. pic.twitter.com/NiomkFQqJb

Stephanie Grisham, Trump's spokeswoman, has confirmed that Melania Trump is a Catholic. Looking back, there was no doubt that Melania Trump has faith. In February 2017, the first lady surprised everyone by asking the attendees to pray at a rally in Florida. She then gave the Lord's Prayer recital. During her few public speaking arrangements, the first lady was found to frequently say prayers and blessings.

Even though U.S. President Donald Trump has repeatedly advertised his Presbyterian faith, his wife's religion was not made public. Donald Trump married Melania at a Florida Episcopal Church in 2005. It was the same church, Bethesda-by-the-Sea, where Barron, their son, would be baptized a few years later. He will also be scheduled to attend the religious denomination school, the Potomac located St. Andrew's Episcopal School in the fall.

Grisham declined to say whether the president and his wife will raise Barron, their son, as a Catholic. She also declined to say anything which concerns Melania Trump's religious habits. The list of unanswered questions also included whether she attends Mass on a regular basis. It is to be noted that Melania Trump is not the first Catholic first lady to take up residence in the White House. That distinction belongs to Jacqueline Kennedy.

The first lady revealed today that she's a practicing Catholic, how do you like them apples? >https://t.co/L9JZ7Z9WEJ

Melania Trump made headlines on May 24 for wearing the standard outfit demanded by the Vatican when she met the pope. She wore black formal wear and long sleeves. There was also a veil to cover the head. The pontiff and the first lady had a lighthearted conversation. Pope Francis teased the first lady about what food she treats her husband with. He suggested potizza, a Slovenian pastry.