What is a Seventh-day Adventist Anyway? The 7 Most Revealing Facts Seventh-day Adventists are a member of a Protestant sect that preaches about the imminent return of Jesus Christ to Earth. These believers observe Saturday as Sabbath. The Seventh-day Adventists accept the Bible as the only source of their beliefs. Other than that, most of their beliefs are similar to that of conventional and conservative Christianity. This includes the fall of mankind from Eden, the creation of the Earth in six days, the divinity of Christ, belief in Satan as a rebellious being, the resurrection of Jesus, the restriction of same-sex marriage, among many others.

What is a Seventh-day Adventist Anyway? The 7 Most Revealing Facts
Tweet This

The religion’s beginnings can be dated back to the first half of the 19th century. This is when the American preacher William Miller predicted that Jesus Christ would come back to Earth in the year 1844. Based on this prediction, he built up a religious movement which came to be known as Seventh-day Adventist. Since then, the Church has transitioned from being perceived as a cult by some Americans to a more mainstream Evangelical Christian denomination. 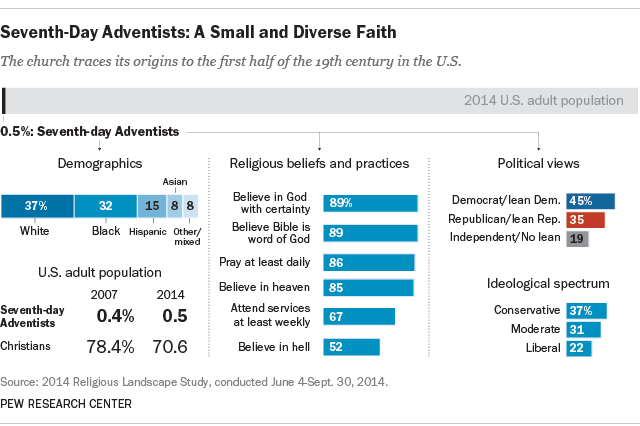 With the upcoming American polls and Ben Carson, one of the leading candidates being a Seventh-day Adventist, let us look at seven facts of this religion:

1. About 0.5% of the adult population in the United States is made up of Seventh-day Adventists. They are also among the most ethically and racially diverse American religious groups. This is because 32% are black, 37% are white, 15% are Hispanic, and 8% are Asian. The rest of the 8% either belong to another race or a mixed race.

2. In terms of traditional measures of observing religion, Seventh-day Adventists are extremely eligious. Most of the believers say that they believe in God and say that religion is a very important and integral part of their lives.

3. Seventh-day Adventists attend the religious services on a weekly basis. This is higher than any other Protestant denomination. In addition, they are also known to pray on a daily basis. A big majority of Adventists also believe that Bible is the word of God, including most of them saying that it should be taken literally. Two-thirds of the believers also say that they look to religious teachings and beliefs as their primary sources of guidance regarding right and wrong.

4. Most of the Adventists also believe in the existence of Heaven, but very few of them believe that Hell actually exists.

5. Adventists are also more spread out on the spectrum of ideology. 31% say they are political moderates, 37% identify themselves as conservatives, and 22% say they are liberals. What is even more interesting to note is that majority of this sect favor a bigger government, which will be more capable in providing a wider range of services.

6. Even though Ben Carson has compared abortion to slavery and made an order to ban it under all circumstances, the other Seventh-day Adventists are actually somewhat divided on their opinion regarding abortion. 42% of them say that abortion should be made legal in most or all of the cases, whereas 54% believe that it should be made entirely illegal.

7. Lastly, Seventh-day Adventists are also more united in their opposition towards same-sex marriage and homosexuality. They believe that since it has been prohibited for them in the Bible, they must adhere to it. About 59% say that homosexuality should be discouraged by society while 63% say gay and lesbian couples should be allowed to marry openly.

What is a Seventh-day Adventist Anyway? The 7 Most Revealing Facts