Young citizens of only two countries, the African nation of Ghana and the once Soviet component Georgia, are more religious compared to their elders. Pew Research Center, the Washington headquartered survey specialist, went over 106 countries to discover that in 46 countries in the list, young citizens aged from 18 years to 39 years are less probable to keep religion as an important part of their lives. The survey regarded any person above 40 years of age to be an “older adult”.

Even though the age gap when it comes to religious commitment is more pronounced in some countries compared to others, the phenomena changes in different social and economic contexts both in advanced industrial and developing economies. These are applicable in Christian majority countries and Muslim ones as well. It is also present in countries where the society is extremely religious and comparatively secular. To give an example, religiosity is on the wane within the under-40 population not only in secular and wealthy nations like Switzerland and Japan but also in developing countries like Nigeria and Iran.

It should be kept in mind that this less religious trend is popular but not universal. Multiple countries have exhibited no statistically significant difference when it came to the observance of religion between the older and younger (under-40) adults. Where there is a difference, however, it is seen that younger people are invariably less religious compared to their older compatriots. This age gap is most pronounced in five nations: Portugal, Poland, Romania, Greece, and Chile. It is to be noted that all are majorly Christian countries. All these five countries have a minimum percentage point difference between the two age groups. 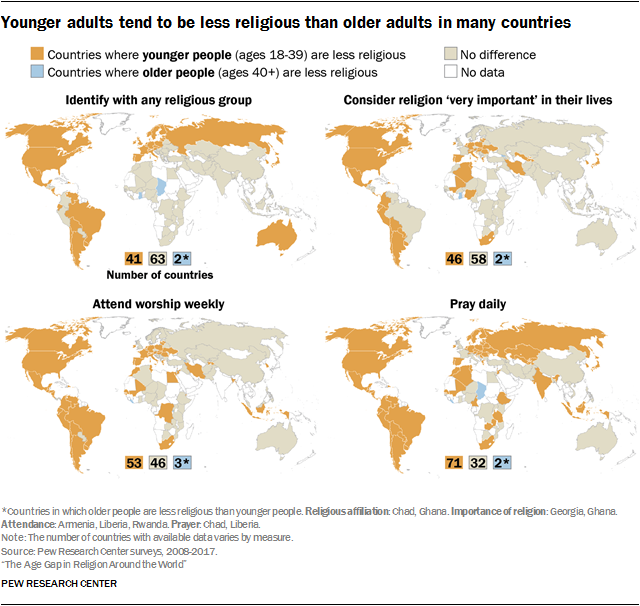 As those who are now young grow older, I wonder if they will become more religious? @LandonSchnabel any thoughts on this? https://t.co/NNyZTg7OtE

The report puts forward a cogent explanation for this trend. It says that irreligiosity has a strong correlation with economic development. This is as collective worries concerning everyday life are now much less and survival is now assured. It is apparent that every succeeding generation would be less religious.