However, religion continues to play a major role in the world.

The Pew Research Center conducted a recent study questioning 30,133 respondents spread over 27 countries to find answers on queries related to gender equality, religion, and diversity. Questions were also asked about family ties. The results have come in, and they are clear: about 70 percent of the respondents say that their respective countries have become much more diverse. The respondents agree that gender equality has risen over the last two decades. About 60 percent of the respondents believe that there has been steady attrition of family ties.

Study Shows Diversity and Gender Equality Increasing, but Religion is Fading
Tweet This

When it comes to religion, the importance of the belief system varies from one nation to another. An average of 37 percent opined that religion now plays a much less important role within their respective countries when compared to two decades past and about 27 percent claim that the belief system plays an increasingly important role. The rest claims to have observed no change.

About 51 percent of Americans view “a more important role for religion” in the U.S. as a positive thing compared to 18 percent who see it negatively. The same outlook is shared by citizens of other polled countries around the world. About 39 percent of the global respondents favor religion to be an essential component in society while a measly 13 percent oppose such a scenario. Only five countries out of the 27 surveyed have largely non-religious populations. All five of these countries are European: Germany (35 percent), Sweden (51 percent), Spain (38 percent), France (47 percent), and the Netherlands (45 percent). In African countries like Tunisia, Nigeria, South Africa, and Kenya, along with countries in the southern hemisphere like Brazil, it is favorable for religion to have an increased importance in society. The majority of the population in these countries are in favor of belief systems impacting their daily lives. 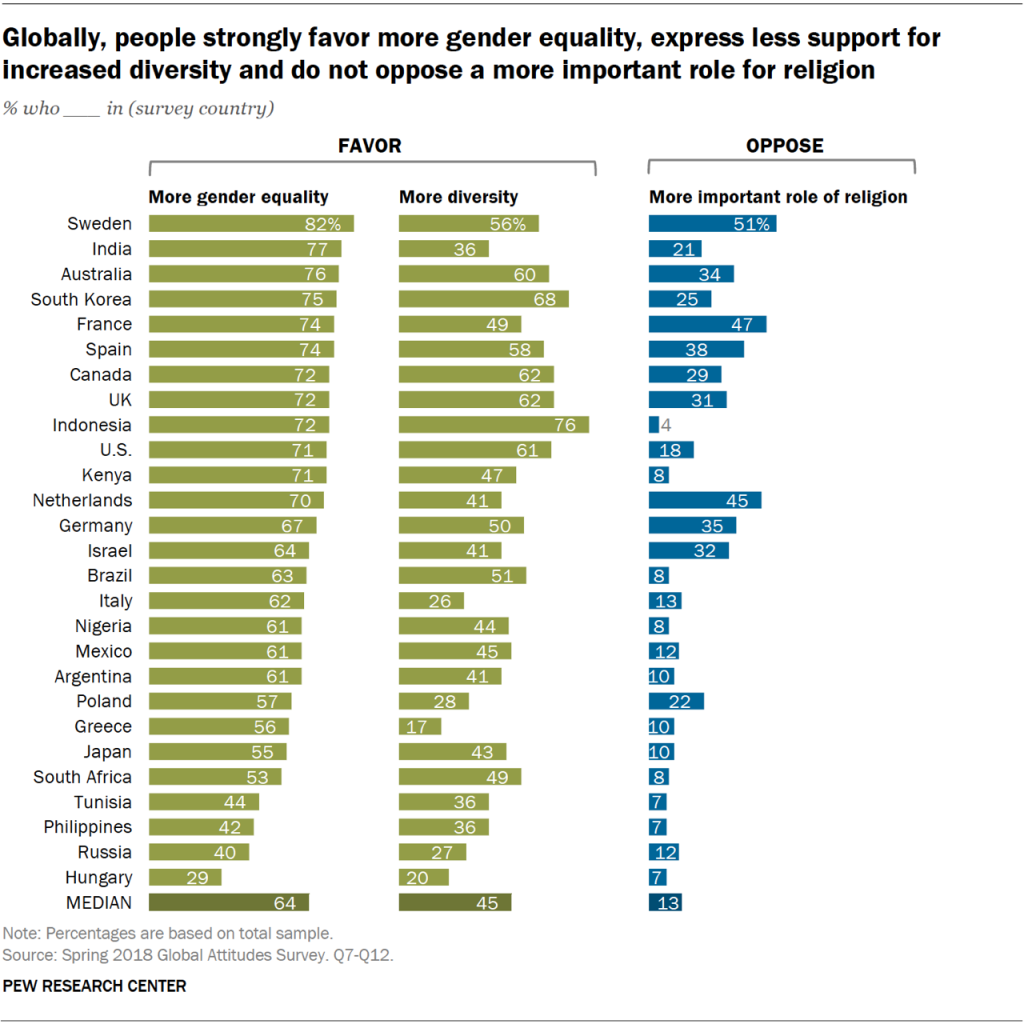 When it comes to diversity, populations across Australia, North America, and Europe believe that diversity has risen in their respective countries and most of the populace have welcomed such a change. There are, however, two exceptions: Greece and Italy. About 62 percent of Greeks oppose their country to being a diverse one, and the same view is held by 45 percent of Italians. It is interesting to observe that in the 27 countries surveyed, men are much more likely than women to hold the view that there is a rise in the equality of the genders. Women are much more probable to disagree on this point when questioned about whether there is a change compared to 20 years back.