Religious News From Around the Web July 5, 2021 Jack Phillips is a Christian baker and owner of Masterpiece Cakeshop who has been for eight years embroiled in court battles for declining to bake same-sex and gender-transition cakes for LGBTQ people. But Phillips is fighting back against an attorney who is suing him. “This attorney is essentially trying to weaponize state law to punish Jack whom he disagrees with on important life issues like gender identity,” said Jake Warner, a legal counsel at Alliance Defending Freedom, “and that’s wrong. The government shouldn’t have that kind of power and as a culture, we need to embrace free speech and tolerate differences of opinions because that’s key to any free society.”

Supreme Court Will Take up Another Religious Tuition Case The High Court will next year hear the case Carson v Makin, which looks to change a rule in Maine that does not allow families living in towns without a public school system, to receive tuition assistance to send their children to religious schools. The case follows the Supreme Court decision in Espinoza vs. Montana Dept. of Revenue in which Justice Roberts wrote: “A state need not subsidize private education. But once a state decides to do so, it cannot disqualify some private schools solely because they are religious.” The Supreme Court last week sided with an Amish community that is challenging on religious grounds a Minnesota county’s requirement that its members install septic systems to treat wastewater from laundry, bathing and cooking. The high court overturned a state court ruling that had sided with the county and asked the state’s courts to review the case again in light of Fulton v. Philadelphia, in which a Catholic adoption agency refused to accept same-sex couples because of religious principles. The Swartzentruber Amish want to reuse that water for irrigation or treat it through less sophisticated systems. 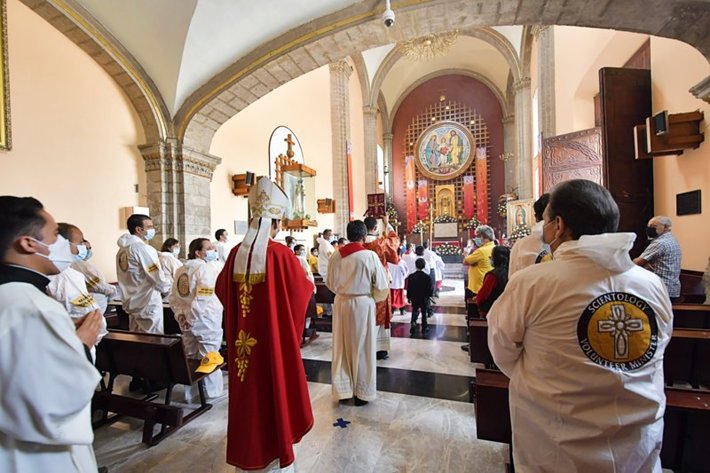 A special Mass at the Iglesia Santa Maria de las Capuchinas in the complex of Basilica of Our Lady of Guadalupe honored the Scientology Volunteer Ministers of Mexico. As the country began to open up, these volunteers took on the task of sanitizing and decontaminating places of worship so those wishing to practice their faith could do so in safety. The Scientology Volunteer Ministers were honored for their work making this and other churches safe for worshipers. Not only do most of the world’s Hindus, Jains and Sikhs live in India, but it also is home to one of the world’s largest Muslim populations and to millions of Christians and Buddhists. In a large survey, Indians of all these religious backgrounds overwhelmingly say they are very free to practice their faiths and see religious tolerance as a central part of who they are as a nation. But while Indians are united in the view that respecting other religions is very important, they tend to see themselves as very different from others.

Religious News From Around the Web July 5, 2021