The number of Christians has decreased in Congress.

The United States Congress in its 116th iteration is marginally less religious and much more diverse when compared to its predecessors. Most of these changes, it is to be noted, are on the Democratic area of the fence. These findings were discovered by Pew Research Center in partnership with CQ Roll Call.

Even though the number of Christians went down, Congress continues to be dominated by Christians. Both Protestants and Catholics are overrepresented in terms of proportion to the public who have elected them in the first place. To any lay bystander, the religious map of Congress is vastly different from the actual population map of the United States. 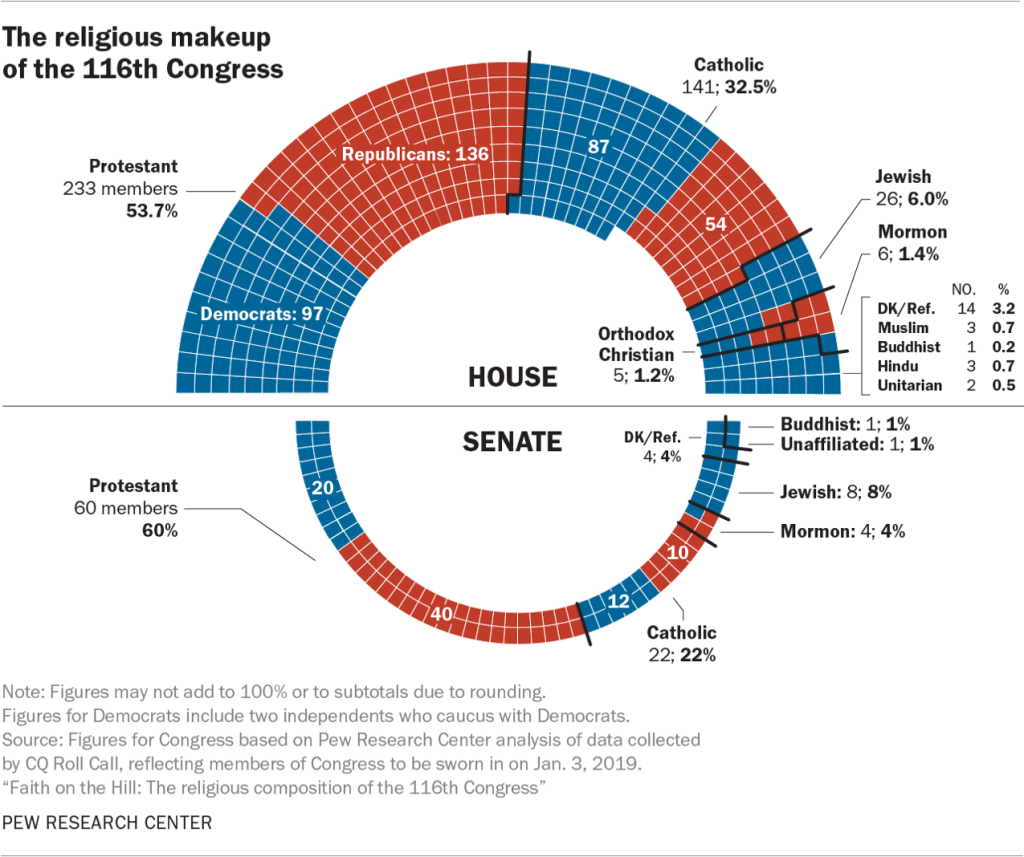 One finding that must be noted is Congress members are more likely to claim any religious affiliation compared to the general American public. A number of surveys have revealed that a growing population of Americans claim to not identify with any specific religious tradition. This trend, however, is not present in Congress. Only one member of Congress, the Democratic Senator Kyrsten Sinema, elected from Arizona, reported zero religious affiliation. In contrast, about 23 percent of the American electorate identify themselves as non-religious. This is as people contesting for seats are afraid to state their non-religiosity, citing voter disapproval. This is corroborated by other Pew Research findings where about 51 percent of American adults have indicated they are less likely to vote for any presidential candidate who does not believe in God.

I love this photo. It shows the various holy books members of the 116th class of Congress used for their swearing in today. There are Bibles from various Christian denominations, the Quran (Islam) and the Veda (Hinduism) pic.twitter.com/KwvdRcx9on

Among Christian denominations, Episcopalians or Anglicans along with Presbyterians suffered pronounced losses in the 116th Congress. The current Congress has nine fewer members in these groups compared to previous ones. At least one seat is lost by Restorationists, Methodists, and Congregationalists. The same is applicable to Christian Scientists. The latter has zero representation in the present Congress. There are fewer Mormons and fewer Catholics in the present edition of Congress. The number of Orthodox Christian Congress members have remained the same. The latter occupies five seats both previously and currently.