Millennial Evangelicals Are Conservative Among Peers but More Liberal Than Elders Millennials are the same as their older counterparts when it comes to attitudes and identification towards abortion.

According to the 2014 Religious Landscape Study conducted by Pew Research Center, Millennials are much more probable compared to older adults when it comes to holding liberal views on a number of political and social issues. This liberal view is stark on sensitive issues like LGBT rights.

In this context, Millennial evangelicals are those who are born any year from 1981-1996.

There is a cautionary note, however: this liberalism does not extend to all spheres. Millennials are the same as their older counterparts when it comes to attitudes and identification towards abortion. 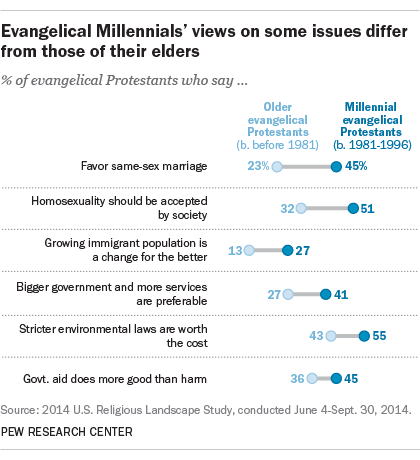 The difference between the two generations goes even further. Younger evangelicals tend to favor tougher environmental laws compared to their older counterparts. The former are also more likely to hold the opinion that the United States will be better if immigration goes unabated. The younger generation has also a much greater chance of favoring government aid for the poor. They also like a government with a bigger role to play in the public sphere. Millennials are okay with an administration that offers more number of services to its citizens compared to a government that does little for its people. Millennials have a greater probability to say they are politically moderate. This probability is only just a little bit more than the opposite and older viewpoint. Older evangelicals tend to identify themselves as Republican. About 51 percent of Millennial evangelicals have pronounced Republican Party leanings in 2014. They voted for the GOP that year. This is not much different than 57 percent of the older evangelicals who did the same.

Conservative thoughts are common among both older and younger evangelicals. The Millennial generation is just as probable as their older counterparts when it comes to voicing their opinions concerning abortion. To give an example, Millennials are as likely as their older counterparts to contend that abortion must be illegal in almost all cases. Among the older generation, 65 percent said that abortion should be illegal. Among Millennials, the support base is 63 percent of total respondents.

The gap between younger and older evangelicals is perhaps most noticeable on LGBT issues https://t.co/nn2FmbSSEo pic.twitter.com/xGWfAsNLx4

Millennial Evangelicals Are Conservative Among Peers but More Liberal Than Elders