One-in-Five Americans are from Interfaith families

24 percent of Millennials say they come from homes where one parent is religious and the other is a religious none. 62 percent of the people who come from these household are likely to grow up as religious ‘nones’ as well. The same number, 62%, of people raised by two Catholic members remain Catholic. 79 percent of people who are raised in Protestant households remain Protestant as they grow up. In cases where there is only one Catholic parent, only 50 percent of the children remain Catholic and in the same case for Protestants, the number is 56 percent.

Interesting findings have emerged from Americans who say that they have been raised in multiple religions. Almost 60 percent of the six percent of Americans say they have practiced many faiths at the same time. This was either due to the religious diversity of parents, family members, or because parents kept switching religions. Among people who were raised in many religions, most stick to the faith their mothers have been following. Mothers have been found to play a more important role in the religious lives of Americans than fathers. 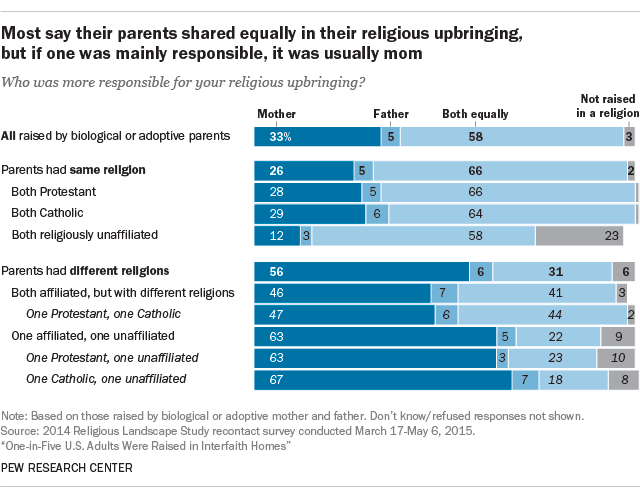 1 in 5 US adults now raised in interfaith homes and mums more influential in religious upbringing than dads. https://t.co/5bPdVtTpAP