The axial tilt is the reason for season

Vocal Americans who loudly complain that there is a war on Christmas should gather more of their kind. As per a survey done by Pew Research Center on the subject of Christmas and faith, fewer numbers of Americans now support the depiction of baby Jesus on public property. The figures say it all. About 72 percent of people in 2014 believed that it was alright to celebrate Christian piety on government land. Right now, the figure has declined to 66 percent in 2017.

The new report generated by Pew incorporated feedback from a total of 1,503 American adults. Margin errors will not exceed 2.9 percentage points for the total sample. The total survey was done by telephone from November 29, 2017 to December 4, 2017. According to Greg Smith, associate director, research, Pew, approximately three among ten Americans support interfaith displays, like mixing displays of the Christian faith with other non-Christian religious symbols like menorahs and the like.

Smith pointed out that the data showed the entanglement of religion and partisanship. This is starkly seen among Republican supporters. Almost 79 percent of GOP supporters are okay with Christian piety displays on public property. In contrast, only 60 percent of Democrats support these kinds of public display. 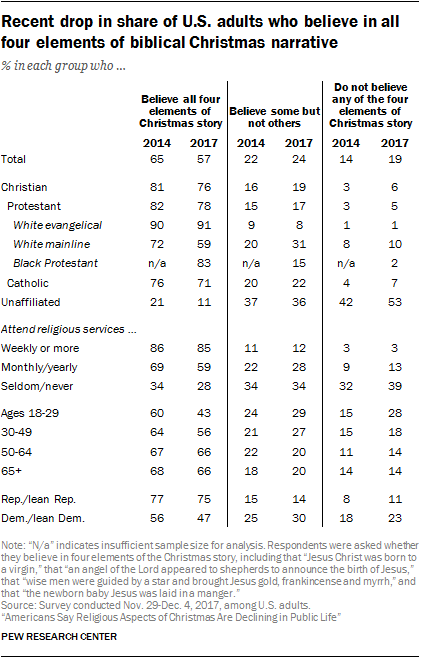 The most compelling aspect of this data is the drop of six percentage points in terms of Christian support when compared from 2014. Pew noted that the reduction is most prominent among the white evangelical Protestants. The decline among them is more steep-about 10 percentage points. It was also found that Americans who identify themselves as religiously unaffiliated are likely to support the installation of Christian symbols on public land if symbols of different faiths also accompany the Christian ones.

Christian religiosity has reared its head in the present Trump administration. Sarah Huckabee Sanders, the spokesperson for the present government stood on the podium in the White House on December 11, and mentioned the work done by a church in West Virginia to preach the spirit of Christmas and also about the American spirit. She then mentioned that Jesus Christ was born on this day and multiple acts of kindness and generosity go unnoticed in the Christmas season.

Dan Barker, the co-President of Freedom from Religion Foundation (FFRF), said that Sanders may require a science lesson. He pointed out that the actual cause for seasons is planet earth's axial tilt. Barker, before he became a freethinker, was an evangelical minister. He said that Christians adopted the axial tilt as a season of Jesus' birth so the Sol Invictus (the unconquered sun) worshiping heathens could be converted into the Christian faith.