Younger Americans Are Pushing for Social and Political Changes An interview of 35,000 adult Americans throws up some fascinating statistics – the percentage of those who attend church services have fallen, while more spend time in prayer. The Pew Research Center compared the results of its 2014 Religious Landscape Study with that of its 2007 survey, which was also along the same lines.

Younger Americans Are Pushing for Social and Political Changes
Tweet This

Interestingly, no significant changes could be observed on these three parameters among the religiously affiliated, but they were all in the 62-66% range. 97% of them continued to believe in God, but the disbelief among the religiously unaffiliated caused the national average to drop by three points, from 92% in 2007 to 89% in 2014. 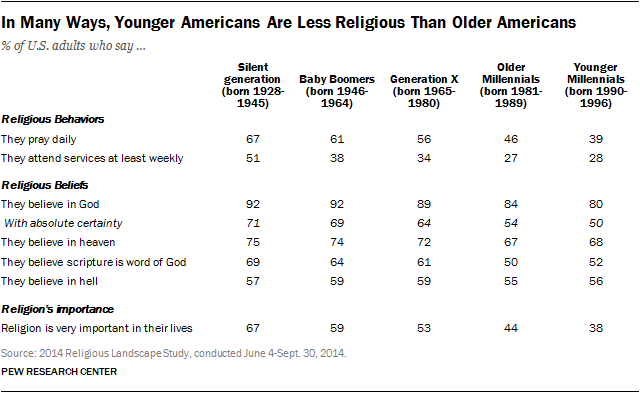 The 2014 Religious Landscape Study also took into account the ages of those interviewed. They were categorized into the Silent Generation (born between 1928 and 1945), the Baby Boomers (born between 1946 and 1964), Generation X (born in the 1965-1980 period), Older Millennials (born in the 1980s) and Younger Millennials (born between 1990 and 1996). Generally, there was a decline in the percentages of those who pray daily, attend services weekly, consider religion to be important and believe in God, Heaven, Scripture and Hell, across the age ranges, with the older ones more religious than the younger ones.

The percentage of Christians who say homosexuals should be accepted by society rose from 44% to 54%, and the jump was seen among all denominations recorded, which included Jehovah's Witnesses, Evangelical Protestants, Black Protestants, Mormons, Orthodox Christians, Mainline Protestants and Catholics. The change is mainly driven by young adults, who are more accepting than their older counterparts. 51% of millennials support homosexuality while only a fifth of the silent generation and a third of the baby boomers agree.

There was no change in their stance on legalizing abortion, and differences are inconsistent among age groups. Politics was also considered – the religiously unaffiliated form the largest percentage of Democrats, while Evangelical Protestants are the biggest religious subcategory among Republicans.

Younger Americans Are Pushing for Social and Political Changes