The inclination of the church towards consideration of some of the “progressive” issues may be a welcome change but a lot American Catholics have been hoping for more.

The recently held Vatican Synod on the Family ended somewhat inconclusively. Although divorcees got a minor respite, the 270 attending bishops maintained their stance on gay marriage.

Other issues on the table like contraception took secondary position over homosexuality and divorcees being excluded from communion.

Pope Francis may have described the Vatican synod as a way to “open up broader horizons, rising above conspiracy theories and blinkered viewpoints” but the consensus document appeared to have handled several issues rather obliquely and so was open to interpretation.

The report summarizing the three week long debate agrees that divorcees must be “more integrated in Christian communities”. However, there is no direct mention of readmitting them to communion.

The inclination of the church towards consideration of some of the ‘progressive’ issues may be a welcome change but a lot American Catholics have been hoping for more.

A survey of U.S. Catholics and family life by nonpartisan research center, Pew to probe U.S. Catholics’ views on issues such as divorce, same-sex marriage and sinful behavior, found an openness for non-traditional family structures and a general progressive mindset.

As many as 62% Catholics think that the church should allow Catholics who have been divorced and remarried without an annulment and those cohabitating to receive communion. Traditionally, they cannot receive communion unless they abstain from sex with their new partner because their first marriage is still valid in the eyes of the church and they are seen to be living in an adulterous state of sin. 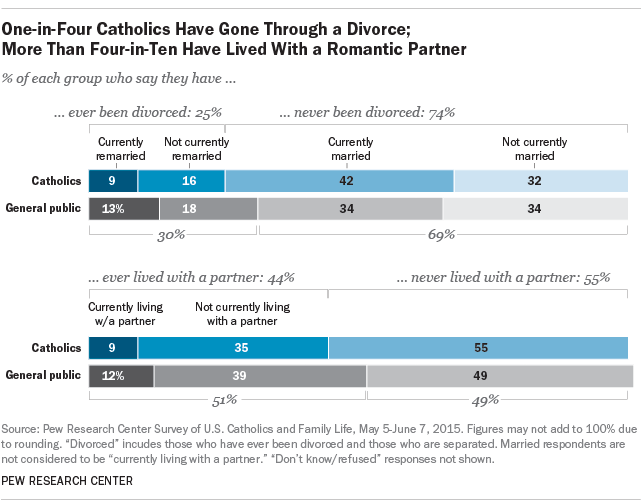 49% feel that getting remarried after a divorce without an annulment is not sinful, as opposed to only 35% who feel it is a sin.

The study also brought forth the Catholic Americans’ attitudes on family, sex and marriage. When probed about their belief about the church’s position on some other issues, 76 % wished to see the church allow the use of contraception.

This shift in thinking has its roots in the changing life experiences of the modern American Catholics. As per the survey, a fourth of them are divorcees out of which one third are remarried. Only 25% of these divorcees sought an annulment as recommended by the doctrines and the rest did not seek an annulment because they did not see it as necessary or did not want to get an annulment.

Now it remains to be seen if Pope Francis' considerate approach and the liberal attitudes of some American Catholic devotees leads to any notable changes in the letter of the church. Is the Court Right to Annul This Marriage Between a Muslim Man and Hindu Woman?
September 2, 2017