A report published by Pew Research Center has revealed that theological differences which rocked and split Christianity during the 16th century have now diminished to such an extent that Christians living in those eras will be shocked.

At that time, Reformation of the Christian religion initiated a number of wars and skirmishes all over Europe. In contrast, modern Catholics and Protestants hold the belief that they have theologically more in common than the differences.

Pew surveyed over 24,000 individuals spread over 15 countries. The survey was done over the telephone with interviewers questioning the respondents. The action revealed that most respondents, whether Catholic or Protestant, believe that salvation comes via both faith and doing good actions. Religious observance across the spectrum was also low. Only 14 percent of Catholics and eight percent of Protestants admit they attend religious services every week.

The Pew study did note that Western Europe continues to have a geographical divide due to 500-year old events. Northern Europe is dominant by Protestants. The Catholics dominate the continent's southern areas.

The Reformation of the Christian religion began when a German monk by the name of Martin Luther, nailed the 95 theses which he wrote to a Wittenberg church door on October 31, 1517. This document was written in Latin. It challenged Roman Catholic Church authority. Luther's action was one among the many events challenging the papacy at that time. It was specifically against sale of indulgences, a highly profitable activity. The latter sold well as they were marketed as a faster method to go to heaven after death.

According to Luther, salvation and its justification like avoidance of hell and getting into heaven, was an issue between God and an individual. His document was rapidly translated into a number of languages, including German. His ideas spread all over Europe within a few weeks, leading to cultural, religious, intellectual and political upheaval. 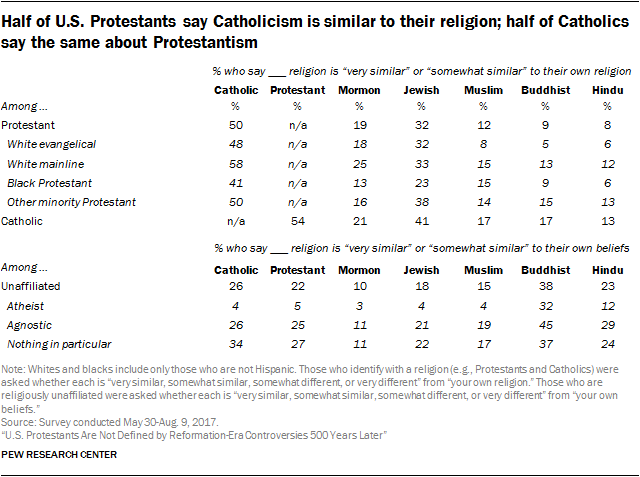 #Catholics and #Protestants agree they have more in common than not https://t.co/qqqgBHsmBR… https://t.co/kOiGLGdt6u

The 20th century witnessed a gradual rapprochement between Protestant and Catholic traditions. The two strands of Christianity showed increasing cooperation. Pope Francis encouraged such actions. It does not mean that all Catholics and all Protestants have warmed up to each other. Sectarian pockets continue to exist. The dominant mood, however, is peace, with leaders of German Protestant and Catholic churches issued joint text. The latter asked for 'healing of memories' blighting past divisions.

Martin Luther Exhibit Shows How He Used Technology to Start a Revolution in the 1500s
December 1, 2016 Why Pope Francis’ Trip to Sweden is A Really Big Deal
October 26, 2016