Only 10 countries are anti-religious according to new report.

The Pew Research Center has found more than one in five nations impose an official state religion. The majority of religious-oriented countries are Muslim. Over 20 percent of the countries have a religion they tend to give more preference to. In contrast, about 53 percent of countries have no preferred or official religion. Five percent (10 in total) are seen as hostile to religion. The list of anti-religious countries includes Vietnam, China, North Korea, Cuba and a number of other countries which were formerly members of the now extinct Soviet bloc.
More Than 1 in 5 Countries Have an Official Religion
Tweet This

The data collected was found by Pew Research Center's analysis of the constitution of respective countries. Information was also funneled from non-governmental and also governmental organizations. The research was conducted at the same time with the yearly coding process of Pew’s global restrictions study on matters of religion. The coders analyzed every country's basic laws, constitution and their official actions and policies towards the religious groups were also taken into account. 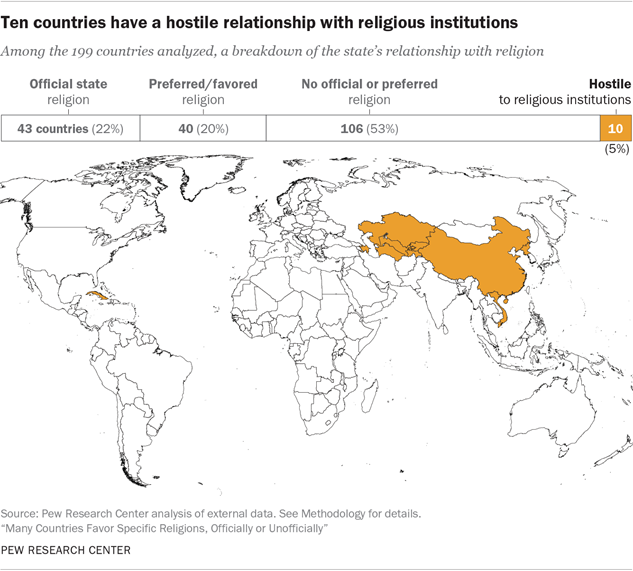 Most of the 43 nations having state religions are geographically located in North Africa and the Middle East. A few are in northern Europe. The survey found that Islam is identified as the official religion in a total of 27 countries spread across Asia, North Africa, Sub-Saharan Africa and the Middle East. A total of 13 countries are officially Christian. Nine of such countries are in Europe. Two countries- Cambodia and Bhutan- have adopted Buddhism as the state religion. Israel is the sole Jewish state. Hinduism is not an official religion of any country. 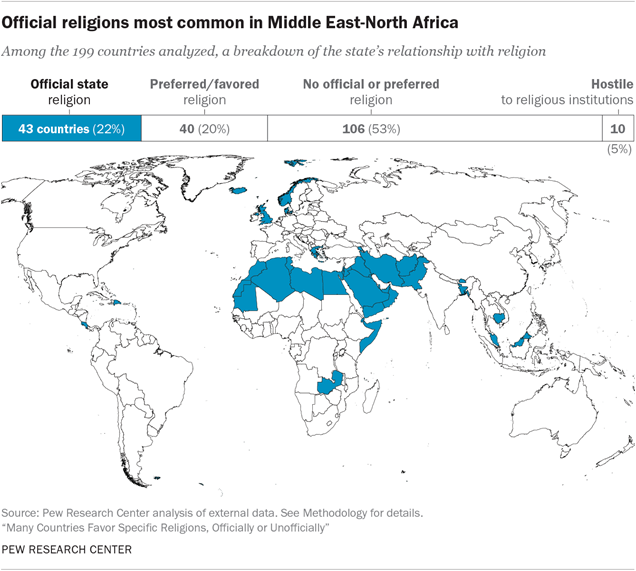 In some countries, the role of state religions is mostly ceremonial. The distinction frequently comes with a number of advantages in the form of tax status or legal status. The advantage also extends to real estate and a number of other properties. The state also offers them financial support. Not only that, nations with established or state endorsed faiths usually have a tightly regulated practice of religion. These include the placement of restrictions or banning minority religious groups.

Pew report:Most of 43 countries with a state religion are in the Middle East & North Africa, the majority are Muslim https://t.co/o6ysbe3vRb

A majority of national governments all over the world, however, are found to be neutral towards religion. Over 100 nations and territories surveyed in the study did not have any preferred or official religion as surveyed in 2015. The United States is one such country. The country may offer privileges or benefits to a few specific religious groups but usually do so sans the favoring of a particular group excluding all others.