Recent Poll: 60% in favor to maintain funding for Planned Parenthood.

With the race for the presidential nominations and the election just a quick 13 months away, and having already witnessed two Republican candidate debates, the issue of being pro-choice or pro-life is once again a major focus for all candidates, as it seems to be in every election cycle. Roe v. Wade was decided upon by the Supreme Court almost 42 years ago, and abortion is still a hot button issue for people on both sides of the issue.

Recently, the state and future of Planned Parenthood’s nearly half a billion dollar federal funding, mostly from Medicaid reimbursements, has been called into question like it never has before. Thanks in large part to the release of a short video series released by The Center for Medical Progress claiming to show evidence of several Planned Parenthood employees and executives making deals and arrangements to sell aborted fetuses for profit, though any substantial evidence conducted by several investigations, including one by the state of Missouri, has yet to be found. However, the videos brought about very passionate responses from all sides, but particularly from the religious right, prompting the Republican candidates to call for the defunding of Planned Parenthood.

60% Support the Ways Planned Parenthood is Improving Lives
Tweet This

With the conservative outrage calling for Planned Parenthood to be defunded across the country, Congress Republicans have responded in kind by demanding that the upcoming budget approval include an amendment to eliminate money going to Planned Parenthood, and some are even threatening to attempt to force a government shutdown if such an amendment is not included in Congress’ new budget. 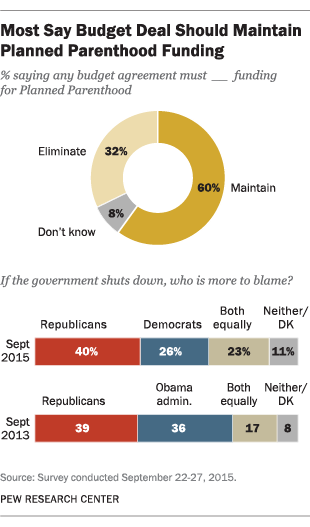 However, it would seem that a majority of the American people, not just the conservative evangelical voters, disagree. The findings of a national poll conducted by the Pew Research Center that was conducted from September 22-27 among a standard sample size of 1,502 people, speak for themselves. According to the results of the poll (which can be found in its entirety here), 60% of the study participants say that any budget deal must maintain funding for Planned Parenthood, while 32% say that any agreement must eliminate funding for the organization.

Majority of people SUPPORT Planned Parenthood. I am one of the them (tho I do not need or use their services). They HELP WOMEN & FAMILIES!

A Majority of American’s Support Planned Parenthood and do NOT want its funding cut…Poll http://t.co/r8rvtJNnUq

Despite the results of the Pew poll, it does not appear that the issue of Planned Parenthood funding and the larger discussion of abortion rights for women in America is anywhere close to being resolved. The presidential campaign only continues to ramp up, and hot button issues that have received so much public awareness as of late are rarely swept under the rug.